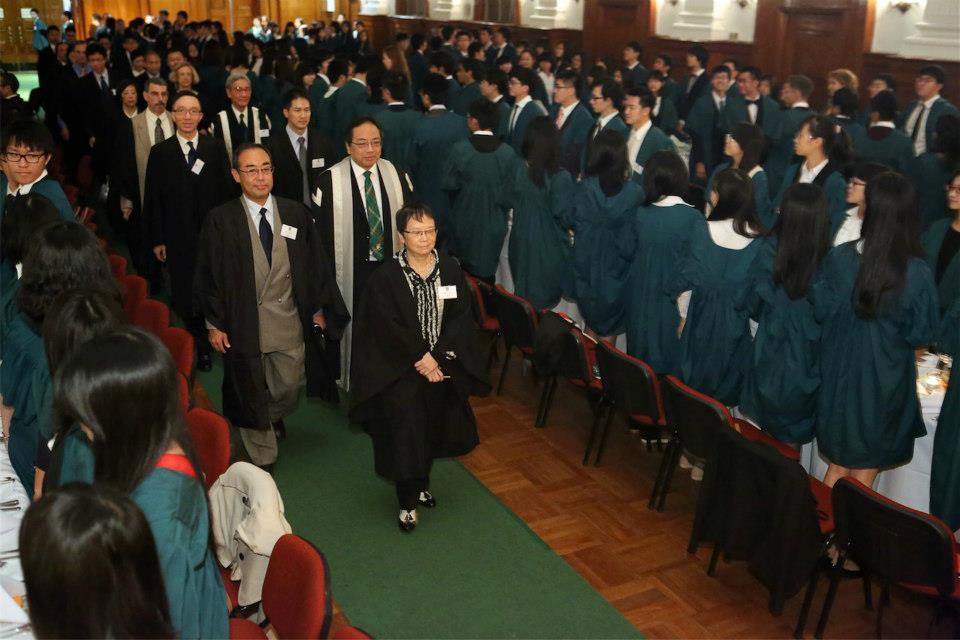 The University of Hong Kong

Albert, our beloved Dean of Students, would tell you that I have taken up this job with much trepidation. Bernadette, our feisty Director of the Development and Alumni Affairs Office, would testify to the same. I don’t think I’ll be standing here before you without their many words of encouragement and promises of support. So thank you, Albert and Bernadette.

But my deepest thanks go to Vice-Chancellor Professor Tsui Lap Chee, and Pro-vice Chancellor Professor S.P. Chow for their vision and hard work in bringing the Residential College into being. With ingenuity, they have turned an ambitious idea into four rising towers in Hong Kong’s oldest neighborhood.

Special thanks also go to two distinguished members of the Hong Kong Community who are with us tonight. Mr. David Mong, Honorary University Fellow and Court Member, is a long-time friend of the university who has been most generous in lending support to the Residential College project. And Mr. Michael Wu, HKU Court Member, who has been most forthcoming in offering advice and help in the difficult finishing work on the dining hall and related services.

I also wish to acknowledge colleagues at the Journalism and Media Studies Centre, my academic home since 1999, when I returned after spending more than two decades in the United States. I would not have the courage to take up this job without their dedication in building the JMSC from strength to strength. JMSC colleagues present this evening include:

We also have Mrs. Susan Hornick, who arrived HK last week, fresh from her work with the US Democratic Party’s presidential campaign.

Then there are my fellow masters, Professor Gabriel Leung and Dr. Sara Liao, the deputy masters, and our team of intrepid senior tutors and tutors who have been battling the myriad teething problems of the college. Thank you very much.

A Sense of History

As I thank everyone who has made the College and this evening possible, I can’t help but speak with a deep sense of history. I did my undergraduate studies at this university in its relative young days when the student body totaled some two thousand plus. I was the first class of students enrolled in the newly created Faculty of Social Sciences. I was lucky enough to be among the first group of women that was admitted to the only residential hall on campus at that time. That was 1969, when Old Halls first opened its doors to women students. The small class of women took up half of the third floor of May Hall, which is still standing today.

Those were heady days as Hong Kong was recovering from two riots that saw massive protests and violent clashes with the police. There were bombs on the streets that killed and maimed people.

Today’s HKU and Hong Kong are of course very different, but no less challenging. First and foremost, the study body has grown to more than 20,000 strong.

In my days at Old Halls, the men and women sections were separated by a thin rope on the balcony. Today, men and women no longer enjoy such proximity since they are being housed on separate floors.

More significantly, to-day’s student demographics is much more diverse from my undergraduate years, when almost all students are local Chinese, with a sprinkle of Indians and Malaysians.

Today for Block A, students hail from 37 countries located on five continents. Our students, meaning you, have come from as far as Chile, Mauritius, Sweden, and Ireland, or as nearby as Singapore, Indonesia, Japan, Malaysia, and Nepal. And we have a significant contingent of students from Mainland China.

You are as diverse in your chosen disciplines: arts, engineering, the social sciences, the natural sciences and more.

One-fifth of Block A residents are postgraduates, pursuing PhD or MPhil degrees. While undergraduates still make up 80% of the resident body, this is an anomaly on account of the double-cohort intake this year. Our goal is to achieve a 50-50 balance between undergraduates and postgraduates.

The university must be commended for its bold move to forge a diverse student body and the ambition to create a new culture from the diversity and this very rich resource.

This is a daunting job, which brings me to the theme of our High Table Dinner this evening: “Building the Polis.”

The word Polis, which is Greek in origin, has these meanings according to authoritative dictionaries: Polis: A Greek city-state; broadly : a state or society especially when characterized by a sense of community; And Polis ( /ˈpɒlɨs/; πόλις, Ancient Greek: [pólis]), literally means city in Greek. It could also mean citizenship and body of citizens.

Hence, “polis” first denotes a space, the place where people gather. For our college, it is the buildings, the podium, and the function rooms. These constitute our mini-city. But “Polis” also evokes the image of citizenship, politics, participation, and above all, the people and the citizens who participate and work together for the common good.

And this is what Block A and our sister Blocks are about. We still have to convert the building’s podium into our hearth, the concourse as a communal street, the function rooms and lounges as living rooms for the college family. But more importantly, we are also building a community of young scholars and a body of citizens.

Building the Polis is a call to action on the part of everybody who has a stake in the Residential College. It’s a special call to student residents since you are the majority of the community. We need to find ways to work together to create a community of shared values and shared duties. We need to find ways to live with each other in this incredibly diverse microcosm of ours. We need to learn from one another’s culture and values. We also need to rise above our differences to find common ground for the common good. We have to define the common good. We will have to define our relationship with the surrounding neighborhood, and the people who have generously accepted us into their crowded alleys and streets, their parks and walkways. We need to connect with the people who have allowed us to share with them the joy, and the trials and tribulations of living in Kennedy Town, a neighborhood in rapid transition.

Building the Polis is a call for participation, collaboration and commitment. Through our actions, we’ll give meaning to the bricks, the podium and the towers.Dear young friends, we are embarking on this venture amidst momentous changes in the world around us.

Modern technology, in particular the Internet, has diminished geographical distances and turned many traditional institutions on their head. Institutions, be they the media, governments, or civil society groups, are being forced to reinvent themselves. Transparency is fast becoming the rule, not an exception. All authorities are facing scrutiny like never before.

Just last week in Beijing, a new leadership was unveiled in the most scrutinized gathering of the Chinese Communist Party. And the day before that, capitalist United States returned Barack Obama to a second four-year term in the aftermath of a bitterly contested race.

The leaders are not wasting any time. To-morrow, President Obama will start his historic visit to Cambodia, Thailand and Myanmar, in an effort to shore up his Asian policy. Beating President Obama, outgoing Chinese Premier Wen Jiabao arrived this afternoon in Phnom Penh to attend the ASEAN and East Asian Summit.

The leaders are moving fast, even while they still have to find ways to fix the economy at home and to keep their people happy.

In this fast changing world, the best crystal ball will not be able to predict the outcome of such superpower engagements or governments’ attempts to recharge or rebalance their respective economies.

What we can be sure of is our ability to learn and to take matters into our own hands. What I can assure you is that Residential College living will prepare you well for the precariousness of modern life and the stormy world outside.

You will make life-long friends as I did from my days at old halls some forty years ago. You’ll engage in many debates, from the mundane to the grandiose, from the silly to the intelligent, and grow wiser from them. You will emerge from the university residential experience smarter, sharper, and more confident.

But you need to commit yourself and contribute as citizens of this polis. And you will receive as much as you are willing to give.

May I now invite the Vice-Chancellor to raise a toast to our Polis and its new citizens.

Friends and colleagues, please rise for the toast.