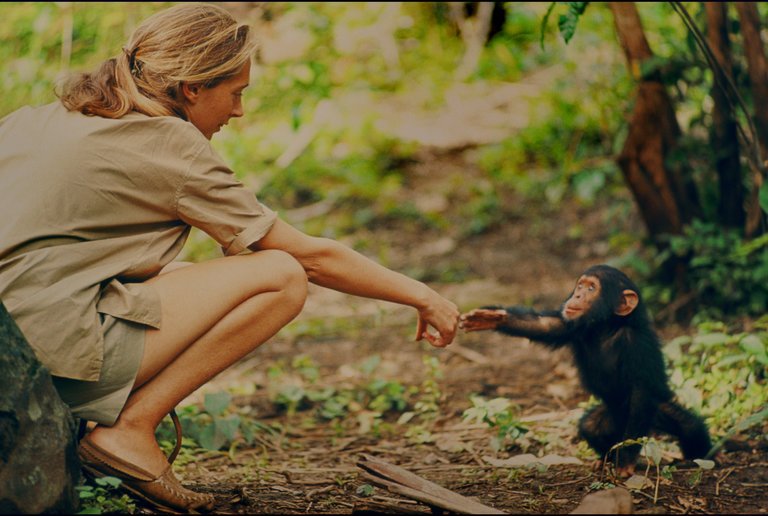 Dr. Jane Goodall’s story is the story of a pioneering woman, fearlessly breaking through societal expectations and African wilderness to pursue her dreams of adventure and her passion for animals. It is the story of a young untrained scientist making unprecedented discoveries about chimpanzees, consequently reshaping the definition of man himself. It is an inspiring tale that has been retold many times in many different ways. Yet, the most recent Oscar-nominated documentary Jane is not only a celebration of Dr. Goodall and her work but also an exploration into human nature and a timely reminder of one of the most pressing global issues today.

Dr. Goodall’s breakthrough discovery occurred in Gombe, Tanzania, when she found a chimpanzee making a crude tool: stripping the leaves off a twig and using it to scoop termites out of their nests. At the time, we were defined as “man, the toolmaker”. However, the realization that chimpanzees could also modify objects for specific use overturned that assumption.  This forced us to return to the question: what sets humans apart from the rest of the animal kingdom?

It is not our personality, nor our emotions, for Dr. Goodall had discovered that chimpanzees possess both in equal depth and complexity. They displayed affection, sorrow, and jealousy. They formed strong familial and social bonds. They could, as Dr. Goodall observed in the tragic case of an adolescent who lost his mother, suffer from depression and die of grief.

In many respects, they were no simpler than human beings in their social and emotional capacities, and this extended to our darker natures as well. Chimpanzees were capable of immense cruelty and brutality. The documentary footage captured part of a civil war that broke out after a small group of Gombe chimpanzees split off from the original community. Identifying the split-off group as enemies, the larger and stronger community attacked them in a spree of violence that approached near genocide. “I thought that (the chimps) were like us but nicer,” Dr. Goodall recalled. This turned out to be untrue. “The dark and evil side of human nature is deeply embedded in our genes, inherited from our ancient primate ancestors,” she concluded.

Dr. Goodall’s research revealed that the similarities between humans and chimpanzees were extensive. However, she identified a key difference, an advantage we had over the rest of the animal kingdom. With our highly advanced intellect, we have developed a sophisticated language system. As Dr. Goodall observed, we could “pass on wisdom gleaned from the past, (and) ask questions about who we are and why we are here”. Due to this ability, we have powers and capabilities that other species do not. This is what makes us human. This is what makes us powerful.

Yet we humans have been misusing our superior intellect to thoughtlessly destroy our shared planet. This has become increasingly obvious in the pollution of our air and water, the contamination of our soil, the extreme weather patterns resulting from climate change. The relevance of the documentary is why Dr. Goodall, initially resistant to the idea of yet another film made about her, agreed to this project. It is why she has left behind her beloved forests to travel the world, giving talks and running environmentalist programmes, to “make sure that our next generation is better stewards than we’ve been”. She believes that we must use our power of language to become wiser, to teach the next generation about our responsibility to preserve and protect the environment.

The story of Jane is an inspirational one, but the rich colors and beautiful cinematography hope to not only impress us but to also impel us into taking on the role that Jane had done. As the rising generation, the onus is on us to restore our natural world. The lifetime work of Jane Goodall has been captured in the documentary. As the film ends, it is our duty to continue the story.